Research funded by the Employee Ownership Foundation proves that employee owned companies are far more likely to keep employees employed than conventionally-owned businesses. The disparity between these two forms of ownership has grown steadily and dramatically over time, peaking in data reported in 2014. 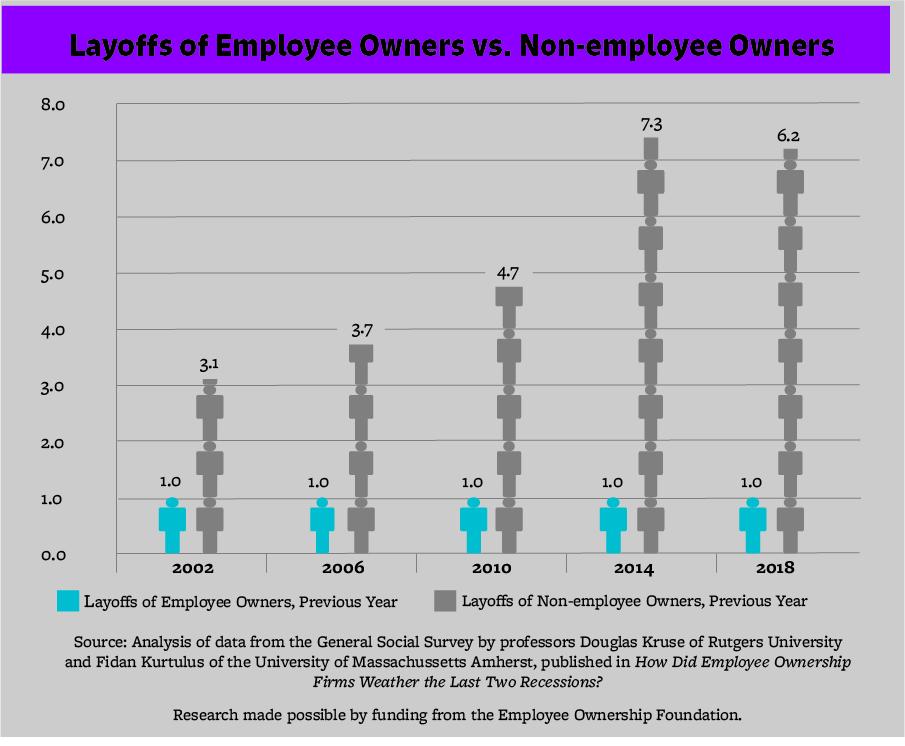 These data likely are a key reason that employees prefer working for employee owned businesses, when given the choice. Businesses with employee stock ownership not only offer features that make their jobs more desirable, they also are more likely to keep employees in those jobs.

It is difficult to overstate the potential financial loss an individual suffers when involved in a layoff—and the potential benefit to individuals and the nation of keeping employees employed.

A recent New York Times article cites research showing that even two decades after the fact, most employees involved in layoffs had not returned to their previous wage levels.

Loss of a job also means the loss of key employer-sponsored benefits—including health care and retirement. Individuals who are laid off may need to dip into savings to pay for health care, or may decide to take on enormous risks by refusing health insurance altogether. Furthermore, losing the chance to accumulate retirement assets—and the tax free gains those assets might realize—is a loss that can never be made up.

The repercussions for individuals are of course significant—no one wants to be laid off—but are even more powerful when viewed on a broader scale.

Employees who are laid off curtail their spending and may draw unemployment insurance, both of which have negative impacts on the economy. A study funded by the Employee Ownership Foundation estimates that by reducing job losses through layoffs, employee owned business saved the federal government approximately $17 billion in 2014.

Employee ownership has its roots in the colonial times during the foundation of America. Learn about some of the major milestones and accomplishments throughout history. >

A Foundation for the Future

Get More From Your Membership

From Capitol Hill to your next staff meeting learn how TEA is working to make your membership work for you. >